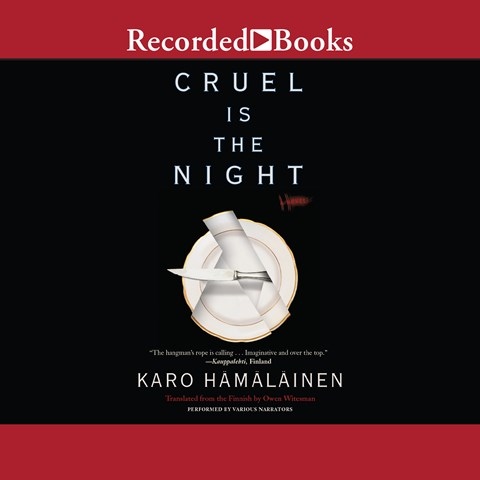 CRUEL IS THE NIGHT

Five performers narrate alternating points of view in this thinly veiled murder mystery. Robert and Mikko are lifelong friends meeting up for the weekend, along with their wives, Elise and Veera. Despite their friendship, Mikko is intent on killing Robert. Liz Pearce as Mikko's wife, Veera, oozes shallowness, acting every inch the villainess. Meanwhile, Elizabeth Jasicki as Elise has a hint of naïveté, but listeners will question how innocent she really is. All four characters are unsympathetic, so listeners will most likely be disappointed by who survives this night of debauchery rather than who doesn't. For those who can tolerate the plot's slow pace and disdainful characters, the narrators' performances are all spot-on. J.F. © AudioFile 2017, Portland, Maine [Published: JULY 2017]