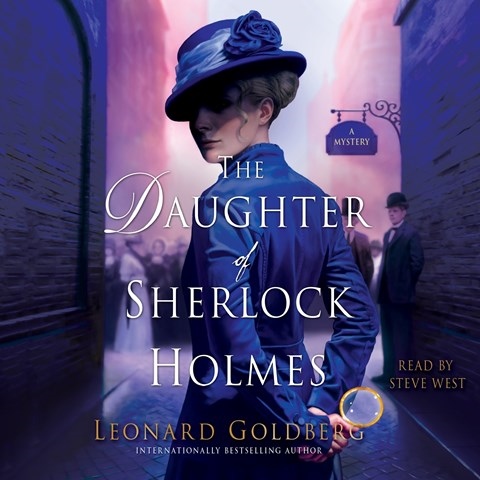 THE DAUGHTER OF SHERLOCK HOLMES

Steve West transports listeners to London at the turn of the twentieth century with his animated narration of Leonard Goldberg's homage to Arthur Conan Doyle. It follows the traditional mystery structure of the iconic Holmes tales but takes place after his death and features the offspring of both Holmes and Watson. West's delivery radiates energy and intrigue as he characterizes the smart, strong personality of Joanna Blalock, Holmes's daughter. While West performs the audio authentically, the awkward, stilted nature of Goldberg's dialogue is distracting. Possibly meant to reflect the time period and Conan Doyle's style, it often sounds scripted and melodramatic. Despite this small trouble area, the audiobook is sure to engage mystery fans. J.F. © AudioFile 2017, Portland, Maine [Published: JULY 2017]