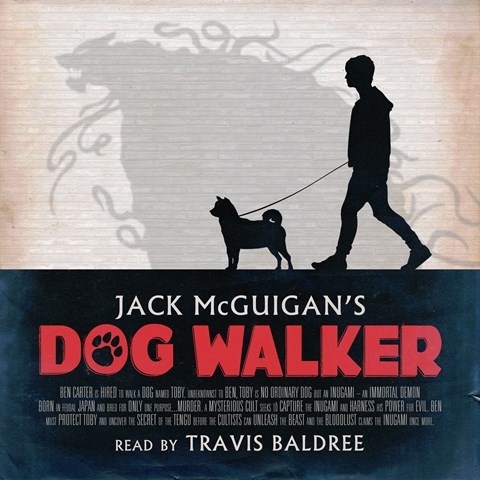 Narrator Travis Baldree inhabits kindhearted, funny Ben Carter, an aspiring screenwriter who is currently employed as a dog walker for Windy City Waggers. Listeners will enjoy the breezy Carter as he cajoles shy or reluctant dogs, encounters a fierce pit bull, and meets Toby, a born-to-kill Japanese shiba inu posing as an ordinary dog. Baldree's tone changes when Carter realizes that Toby is being pursued by cultists who want to use him to dominate the world. Carter, an elderly Japanese wrestler, and Chicago cop Sarah Martinez take on the cultists and locals who aren't as ordinary as they appear. While the Japanese and Chicago accents are impressively delivered, Baldree's best creation is long-suffering Mrs. McGregor, who copes with multiple dogs and four kids under age 6. S.G.B. Winner of AudioFile Earphones Award © AudioFile 2017, Portland, Maine [Published: AUGUST 2017]