Home»Reviews»THE MOTHER OF ALL QUESTIONS 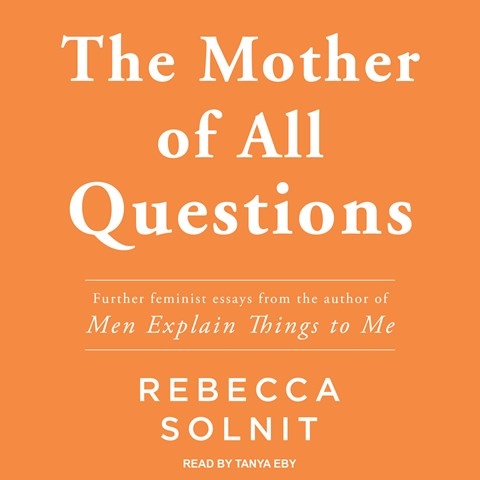 THE MOTHER OF ALL QUESTIONS

Narrator Tanya Eby's careful diction and smooth delivery are ideal for Rebecca Solnit's powerful essays on feminism. Solnit simultaneously exhibits both anger and optimism about the world. Eby conveys the anger about the silencing of women through violence, fear, and rigid gender roles but sees hope in the "arrival of men (or something like that)" to the feminist movement. Solnit is also wry and witty--outlining 80 books no women should read as a somewhat tongue-in-cheek response to a famous ESQUIRE column listing books men should read. She illuminates the idiocy of language warning women about the dangers of alcohol and unwanted pregnancy or rape as if men are not involved. Eby keeps the listener's constant attention with a brisk pace and an expressiveness that capture Solnit's outrage, disbelief, occasional amusement, and rays of hope. A.B. Winner of AudioFile Earphones Award © AudioFile 2017, Portland, Maine [Published: OCTOBER 2017]