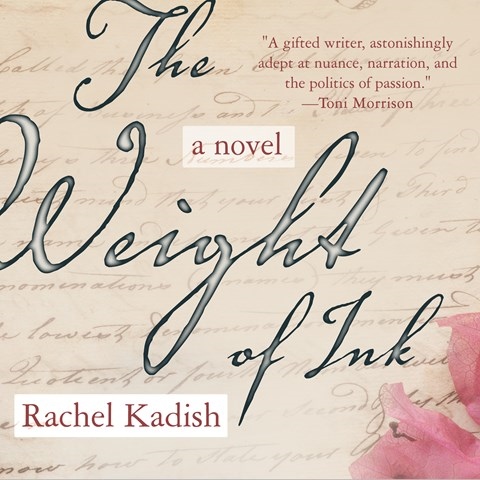 THE WEIGHT OF INK

Helen Watt, a historian who loves Jewish History, and her student assistant, Aaron Levy, study and translate newly discovered Hebrew and Portuguese documents by Rabbi HaCohen Mendez, scribed by Aleph in 1660s London. Corrie James performs this complex tale, which alternates between centuries and across diverse cultures. James adopts two different narration styles and a variety of subtle accents. For the contemporary mystery set in London, her intonation is clipped, while she uses deeper tones and subtly rolled "r's" for flashbacks to 1950s Israel. In contrast, the seventeenth-century characters Ester, the Rabbi, and other Jews from Amsterdam, Portugal, Toulouse, and England sound more formal and have traces of accents. James's performance is marred by frequent dips into inaudibility at sentence endings. M.B.K. © AudioFile 2017, Portland, Maine [Published: AUGUST 2017]