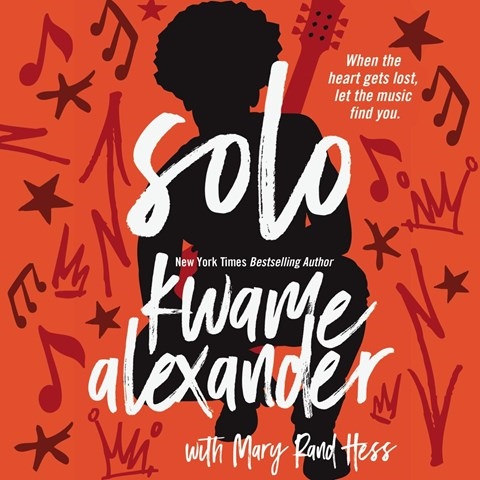 This novel-in-verse, written by Kwame Alexander with Mary Rand Hess, sings with the despair, hope, and love that wash over 17-year-old Blade, a budding musician. Alexander’s affection for Blade is obvious through his narration. He wrings every drop of emotion from a poignant story of a teen who is missing his mother, who died years ago, and battling his father, a broken-down rock star who is incapable of staying sober or taking responsibility for anything or anyone. When Blade’s girlfriend deserts him and his sister reveals a devastating family secret, Blade leaves for Ghana to discover his true history. Peppered with references to songs by famous rockers like Lenny Kravitz and Stevie Nicks, Blade’s own songs—set to music and sung by Randy Preston—are an integral part of this moving audio production. S.G. Winner of AudioFile Earphones Award © AudioFile 2017, Portland, Maine [Published: AUGUST 2017]