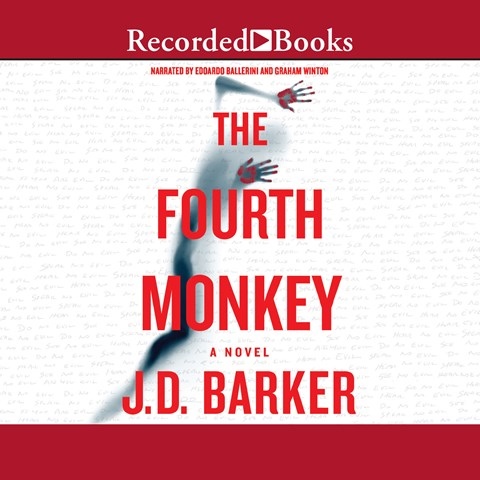 The Four Monkey Killer, found dead, has left behind a diary filled with clues to his real identity. Detective Sam Porter is using it in his search for the only one of 4MK's victims who may still be alive. Narrator Edoardo Ballerini captures Porter's intense, no-nonsense personality with gusto. He differentiates characters well and smoothly shifts between male and female voices. He uses a subtle yet intriguing tone for the descriptions of the streets of Chicago, which truly engage the listener in Porter's investigation. Narrator Graham Winton brings the Four Monkey Killer's diary to life. In a soft-spoken, polite manner he delivers entries that suggest the serial killer's disturbing childhood and echo the twisted commands he hears inside his head. D.Z. 2018 Audies Finalist © AudioFile 2018, Portland, Maine [Published: MARCH 2018]