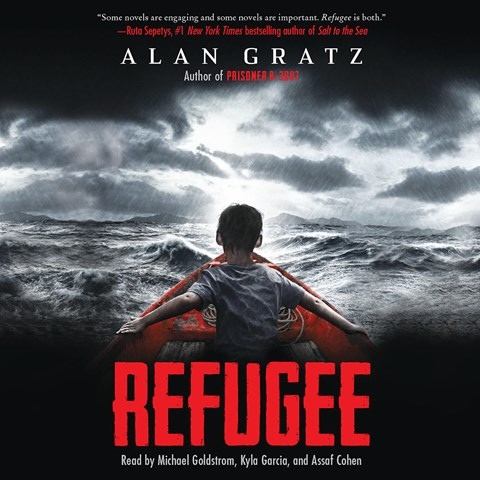 Three narrators read the first-person narratives of three teens who are fleeing their homelands. Michael Goldstrom expresses the anxieties of Josef, who flees Germany in 1938 aboard a ship bound for Cuba. His father has been imprisoned, and Joseph wonders if the family will fall victim to Nazi sailors. Assaf Cohen conveys the maturity, caution, and protectiveness of Mahmoud as his family escapes besieged Aleppo in 2015. Kyla Garcia depicts the devotion of Isabel, who sacrifices her beloved trumpet to buy items needed to escape Cuba for America in a leaking boat in 1994. The narrators' accents differentiate characters and time periods well. Their excellent renditions convey the teens' emotions and point to commonalities of fear, courage, family love, and responsibility. S.W. © AudioFile 2017, Portland, Maine [Published: AUGUST 2017]