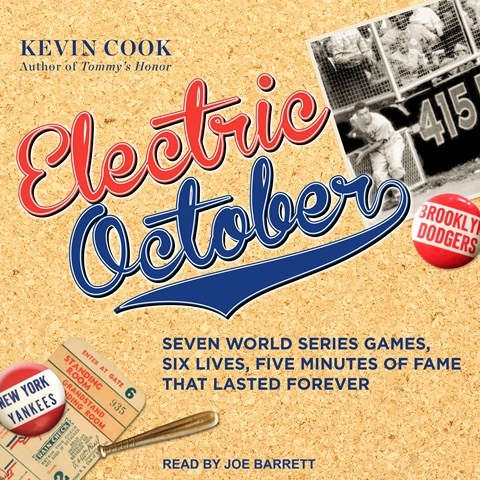 This delightful slice of baseball history follows the lives of six lesser-known players and managers before, during, and after the 1947 World Series. Narrator Joe Barrett's voice is perfectly suited to recount the Golden Age of Baseball. His nimble delivery features a raspy timbre and a fast pace as he captures the spirits of the scrappy ballplayers--Bill Bevens, Al Gionfriddo, Bucky Harris, Cookie Lavagetto, Burt Shotton, and Snuffy Stirnweiss--who played key roles in the series. ELECTRIC OCTOBER is an absorbing story, but even if that weren't the case, listening to Barrett rattle off those vintage baseball names, plus others like Kiki Cuyler and Calvin Coolidge Julius Caesar Tuskahoma McLish (really!), would alone be worth the price of admission. A.T.N. © AudioFile 2017, Portland, Maine [Published: OCTOBER 2017]