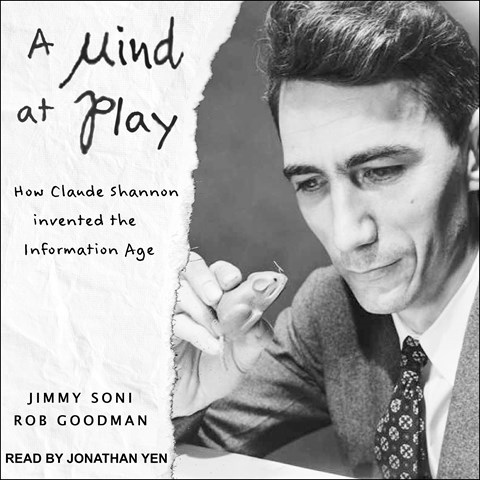 A MIND AT PLAY How Claude Shannon Invented the Information Age

Jonathan Yen's confident, well-paced narration is ideal for this biography of Claude Shannon, the father of the Information Age. In 1948, Shannon awakened the world to information theory, the concept that all information can be quantified, stored, and transmitted in binary digits or "bits" (a breakthrough that makes possible the downloading of this audiobook, among other things). Narrating in a tone that combines authority and warmth, Yen mirrors Shannon's kindhearted genius; he was a man who opened the gates of the digital age but would just as soon talk about unicycles or his flame-throwing trumpet. Described by one colleague as "Lewis Carroll crossed with Albert Einstein," Shannon was well known for his legendary digressions: He built a calculator based on Roman numerals ("Throbac"), learned to juggle (and wrote a scientific paper on the subject), spent eight months working on a system that could predict a roulette wheel's outcome (and devised the first handheld computer in the process), played the stock market religiously, and tinkered with many whimsical creations that became the touchstones for artificial intelligence and robotics. What can one person accomplish when a playful scientific curiosity is unleashed? This well-produced audiobook has the answer. R.W.S. Winner of AudioFile Earphones Award © AudioFile 2017, Portland, Maine [Published: AUGUST 2017]