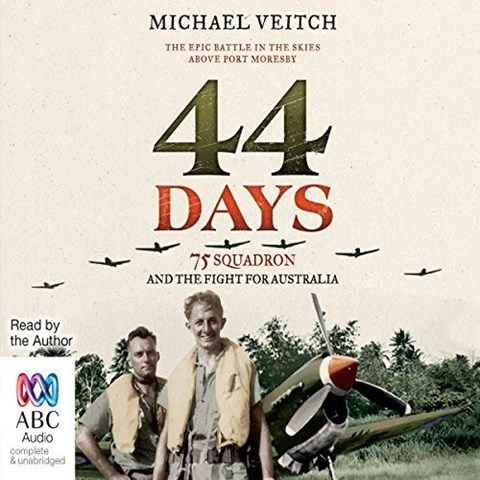 44 DAYS 75 Squadron and the Fight for Australia

This story of Australian heroism during the early, and very dark, days of WWII is narrated ably by its author, who is also an actor. Veitch's well-researched tome tells the story of one Royal Australian Air Force (RAAF) squadron that took on the Japanese who were planning to continue their advance south from New Guinea into Australia. Veitch's diction is clear, and his delivery is straightforward. His Australian accent adds realism to his narration. As he nears the end of his account, the listener is presented with the fact that over a month and a half of nearly ceaseless combat, the squadron almost ceased to exist. An engaging and ably read production. M.T.F. © AudioFile 2018, Portland, Maine [Published: JULY 2018]