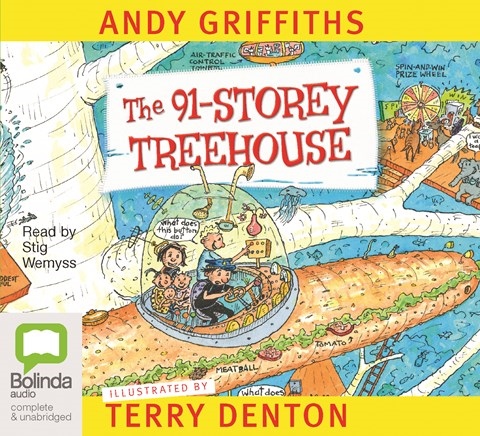 Stig Wemyss's spirited delivery and strong Australian accent add to the zaniness as Andy and Terry continue their misadventures in their ever-growing treehouse. It began at 13, and now has 91 storeys. In addition to babysitting for their publisher Mr. Big Nose's grandkids, they must decide whether to push the red button in the treehouse. Wemyss's Andy and Terry squabble like real kids, and the little Big Noses add to the chaos. Even the baby's only line, repeated throughout, is hilarious--every time! Animal and creepy sound effects add to the fun. There are also lessons to be learned about books, libraries, and animals. Young listeners will revel in wondering what will happen if the red button is pushed. Will the world end, or will rainbows come out of everyone's noses? S.G.B. © AudioFile 2017, Portland, Maine [Published: SEPTEMBER 2017]