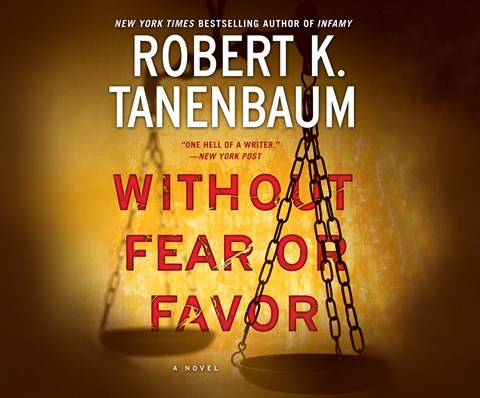 WITHOUT FEAR OR FAVOR

Narrator Peter Berkrot handles this timely, well-written police procedural and courtroom thriller about racism amid police departments and the world at large. Butch Karp is the district attorney of New York City and an easy character to like. Listeners will appreciate Berkrot's deft use of pacing and accents to bring out the characters' personalities and emotions. He is especially adept at the many, mostly male, voices and at building the drama of the story. From the beginning, we know that the black Baptist preacher's son, Ricky Watts, was armed and that he fired first in an attempt to assassinate Officer Bryce Kim. Ricky, however, was set up by a sociopath who calls himself "Nat X." The intriguing, well-plotted story is compellingly delivered by Berkrot. S.C.A. Winner of AudioFile Earphones Award © AudioFile 2017, Portland, Maine [Published: NOVEMBER 2017]