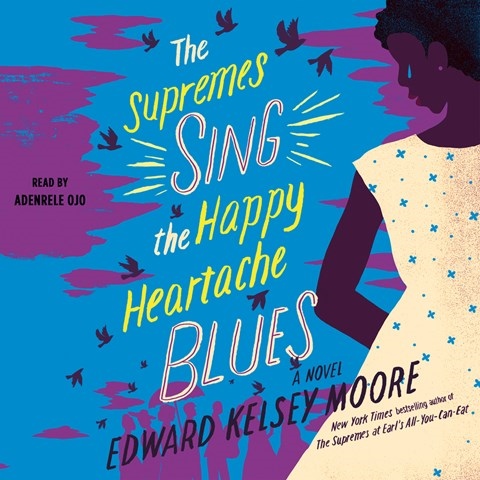 THE SUPREMES SING THE HAPPY HEARTACHE BLUES The Supremes, Book 2

The bravura storytelling in this fresh, hilarious, and sensationally entertaining audiobook puts Edward Kelsey Moore in Alexander McCall territory. Fortunately, his technique is wonderfully matched by Adenrele Ojo's lush voice and take-no-prisoners narrating style. Neither one is afraid to be tart, or emotional, or sympathetic to outlaws. The Supremes are three powerful, sexy women with a slew of complicated relationships with unforgettable characters ranging from pious to criminal. Odette's dead mother is hanging out with Eleanor Roosevelt, who is having a way better time in the afterlife than she ever did on earth, and the two of them are only the start of the fun. If only Ojo would keep her sibiliants crisp, instead of endlessly giving us "shtraight" or "shtruck." Sigh. B.G. © AudioFile 2017, Portland, Maine [Published: JULY 2017]