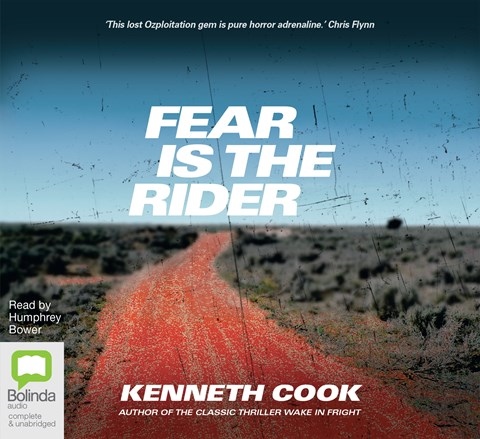 FEAR IS THE RIDER

Talented narrator Humphrey Bower doesn't get an opportunity to showcase his versatility in this white-knuckle thriller--there are just two main characters and handful of incidentals--but he has ample opportunity to demonstrate his aptitude for pace and timing. In this short audiobook, there is almost no plot, just heart-pounding pursuit. John and Katie are being pursued by a seemingly inhuman maniac, but the harsh terrain of the Australian Outback is as much a villain as their pursuer. He is relentless, but their little car is destroyed by rock and sand and never-ending heat that will kill in just two hours. There's nowhere to hide. Listen in one sitting--you won't be able to stop. C.A.T. © AudioFile 2017, Portland, Maine [Published: SEPTEMBER 2017]