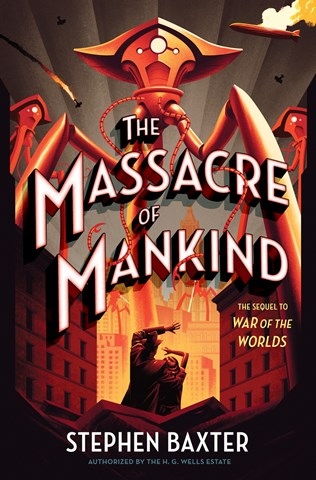 THE MASSACRE OF MANKIND The War of the Worlds, Book 2

Baxter's sequel to H.G. Wells's WAR OF THE WORLDS is an earnest follow-up to the story of Martians on the attack. It could have been published in the early twentieth century, the same period as the original. Nathalie Buscombe narrates with distinct British authority befitting a thriller that's deliberately Anglocentric. The story picks up 14 years after the original, when a truce between the Martians and Earth's humans is in place. As the story details the extraction of Martian raw materials through a human-led infrastructure, the Martians suddenly coordinate a devastating series of attacks across the globe. The result is a prolonged wave of terrifying events as unstoppable Martian tripods land and embark upon a mysterious plan that humans must rise to defeat. S.P.C. © AudioFile 2018, Portland, Maine [Published: JANUARY 2018]