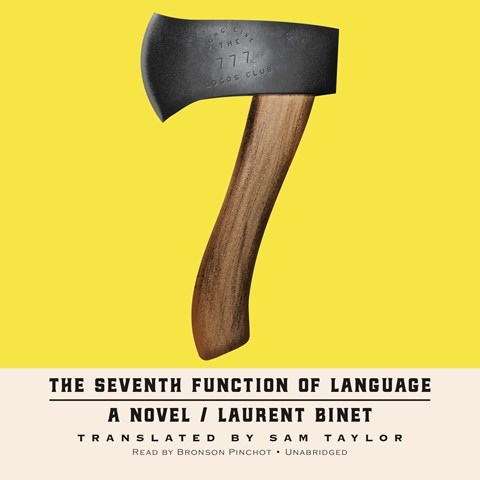 THE SEVENTH FUNCTION OF LANGUAGE

This "Dan Brown style" thriller is delivered with a decided wink. On the straight merits of narration, the audio shines. A graduate student in semiology is commandeered by a police inspector to assist in an international investigation. A professor who may have discovered how to control others through language has been murdered. Narrator Bronson Pinchot revels in the novel's absurdist mix. In one memorable scene, his characters deliver esoteric exposition against the increasingly disruptive backdrop of other characters who are engaged in less academic activities. Not all of author Laurent Binet's in-jokes need be understood to enjoy the story. However, Binet does make SO many references--academic, historical, political, and cultural--that some listeners may wish they could refer to the text, the better to google them. K.W. © AudioFile 2017, Portland, Maine [Published: OCTOBER 2017]