Home»Reviews»YOU BRING THE DISTANT NEAR 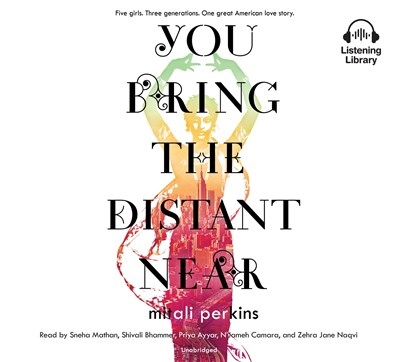 YOU BRING THE DISTANT NEAR

Five narrators represent the alternating voices of three generations of women from South Asia. A chime separates different characters, settings, situations, and time periods beginning in 1970s, when two sisters immigrate to America. Tara's softness represents her artistic soul while Sonia's tone is sharper, especially when it comes to her evolving activism. Both slip facilely into Indian accents as they shift between cultures, searching for their identities and acceptance. Both show tenderness for their supportive father, frustration with their traditional mother, Ranee, and caring for each other. Ranee speaks only briefly; her deep, rich voice hints at the depth locked within her. Later, different narrators portray Tara and Sonia's daughters, who also struggle to understand their identities, their heritage, and their grandmother, Ranee, who is transformed by the 9/11 tragedy. S.W. © AudioFile 2017, Portland, Maine [Published: OCTOBER 2017]