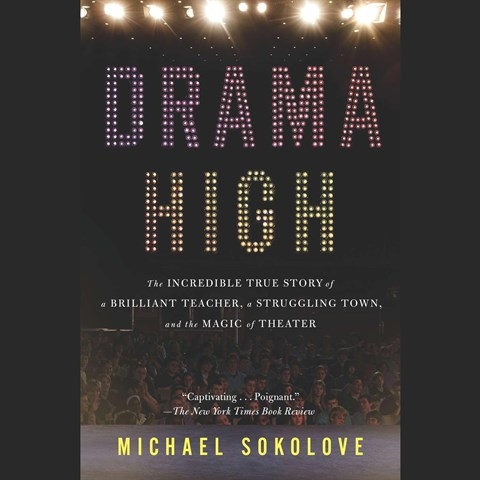 DRAMA HIGH The Incredible True Story of a Brilliant Teacher, a Struggling Town, and the Magic of Theater

Writer Michael Sokolove goes home to visit his Levittown, Pennsylvania, high school and profile theater teacher Lou Volpe as he nears his retirement. Narrator Mark Deakins voices Sokolove's admiration for Volpe, who is known for both his dedication and his edgy, award-winning productions. Two of these are GOOD BOYS AND TRUE, which deals with gay sexuality, and SPRING INTERLUDE, which includes abortion and the F word. Deakins shifts his tone ably between the amusing and the serious as the stories of student theater are grounded by the ever-present backdrop of a blue-collar town's economic decline. He also gives sensitive voice to Volpe's reflections as a gay man who's seen a lifetime of changing attitudes as many of his former students go on to successful careers of their own in the entertainment industry. J.A.S. © AudioFile 2017, Portland, Maine [Published: DECEMBER 2017]