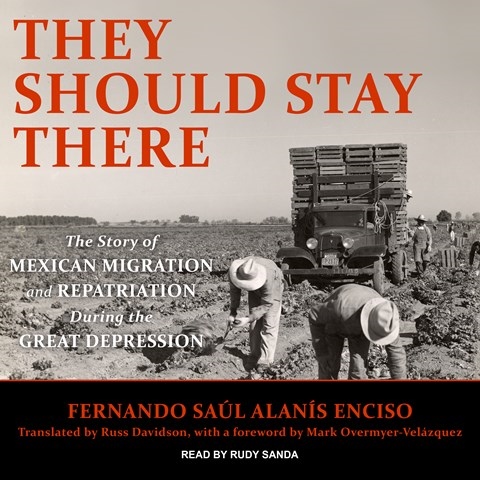 Current debate over immigration is echoed in the repatriation efforts that occurred on both sides of the U.S.-Mexico border during the Great Depression in the 1930s. In this audiobook, Encisco provides a scholarly analysis of events such as a Los Angeles deportation plan and the Mexican government's attempts to create settlements for repatriated citizens. Narrator Rudy Sanda handles the statistics, policy discussion, and research clearly, adding emphasis when needed. At times, aspects such as the poor conditions in settlements remind listeners of the effects government policies have on people. Still, the audiobook is often dry, and seems to be intended mainly for an academic audience. Encisco's writing isn't for everyone, but his comprehensive look at the 1930s situation provides insight into the present-day discussion of immigration and repatriation. J.A.S. © AudioFile 2018, Portland, Maine [Published: JANUARY 2018]