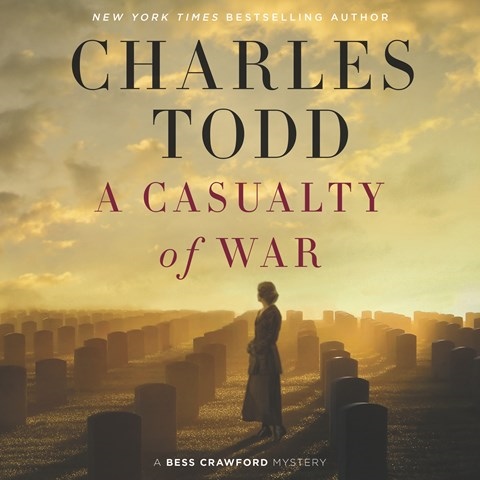 Narrator Rosalyn Landor carries this installment of the Nurse Bess Crawford series. When Sister Crawford nurses Captain Alan Travis, he tells her a disturbing story of having been shot by a member of his own unit. Landor deftly re-creates Travis's horrific story and the warm yet tough personality of Crawford. After the Armistice, Landor's tone becomes more deliberative as Crawford decides to investigate Travis's story. It's enjoyable to hear Simon Bradon assist her. Do we dare hope that he'll pursue a romance with her in subsequent books? Landor's best creations are Mrs. Travis, a bitter, vocal woman whom Crawford questions, and Vicar Caldwell and his wife. The couple are on opposite sides of Crawford's investigation, a situation that adds further conflict to the story. S.G.B. © AudioFile 2017, Portland, Maine [Published: OCTOBER 2017]