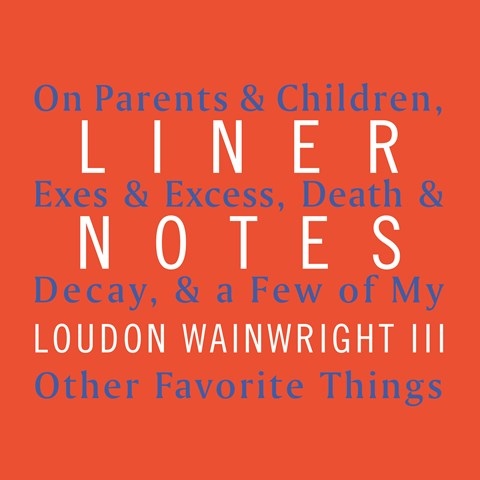 LINER NOTES On Parents & Children, Exes & Excess, Death & Decay, & a Few of My Other Favorite Things

Musician Loudon Wainwright recounts his fascinating and sometimes difficult life experiences, the "liner notes" of his life. Recollections include his student days at Carnegie School for the Arts, his hitchhiking travels along Route 66, his turbulent career, and his multiple relationships. Wainwright performs his own songs throughout this hilarious and honest audiobook. The humor is expected. After all, this is the folk artist whose biggest hit is the song titled "Dead Skunk." Wainwright's frankness can be jarring, but his openness is ultimately winning. Listeners who don't consider themselves "Loud Heads" (an actual phenomenon that Wainwright describes) will still enjoy this audiobook. Wainwright references his own work often, and the freedom to play his own work while he tells his stories makes this audiobook the definitive version of this title. S.P.C. © AudioFile 2018, Portland, Maine [Published: JANUARY 2018]