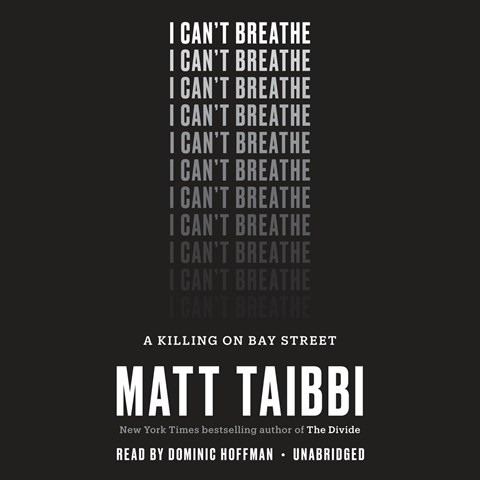 I CAN'T BREATHE A Killing on Bay Street

Police brutality against African-Americans is depressingly common, but the 2014 case of Eric Garner was in a class by itself. A cell phone video captured his dying gasps--"I can't breathe"--as he was trapped in a choke hold by a police officer. Narrator Dominic Hoffman's gravelly timbre and tough tone are an ideal fit for this outstanding piece of journalism. There is a lot of dialogue here--a testament to Taibbi's outstanding reporting--and Hoffman expertly characterizes New York and African-American speech without slipping into caricature. He also manages to capture Taibbi's dark and occasionally sarcastic humor when recounting the injustice of the Garner case and others like it. The account loses some steam in the final couple of hours, but the slow denouement won't be enough to defuse the anger listeners will feel at the end of this powerful narrative. D.B. Winner of AudioFile Earphones Award © AudioFile 2017, Portland, Maine [Published: OCTOBER 2017]