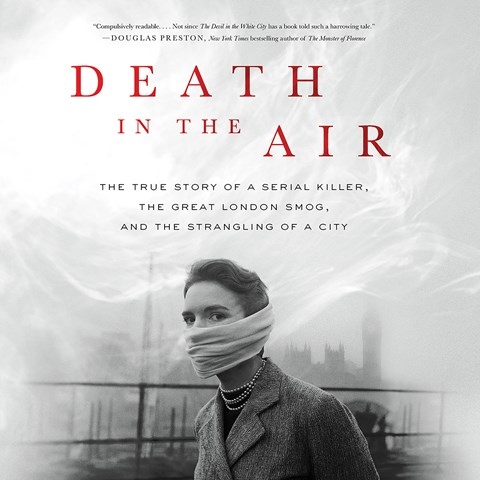 DEATH IN THE AIR The True Story of a Serial Killer, the Great London Smog, and the Strangling of a City

Scottish-born narrator Graeme Malcolm reads this inventive mix of true crime, social history, political cover-up, and environmental exposé with just the right mix of traditional British verve and stoicism. For five days in early December 1952, a heavy, yellow, noxious fog descended upon the city of London. The air was so thick with the ash and residue of a cheap coal called "nutty slack" that the populace could hardly see or breathe--a true pollution disaster. Meanwhile, a serial killer was burying his latest victims under cover of "the Smog." There is a tone of justice served in Malcolm's voice as he delivers the final verdict: A politicized Parliament did nothing, and 12,000 people perished. B.P. Winner of AudioFile Earphones Award © AudioFile 2017, Portland, Maine [Published: NOVEMBER 2017]