Home»Reviews»SAMANTHA SPINNER AND THE SUPER-SECRET PLANS 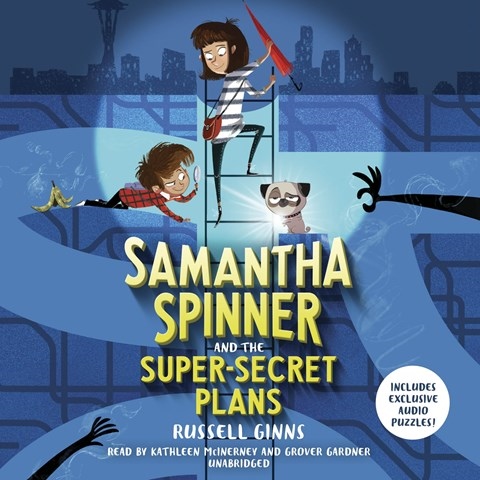 SAMANTHA SPINNER AND THE SUPER-SECRET PLANS

Narrators Kathleen McInerney and Grover Gardner hold listeners in the palms of their hands. Their spot-on kid voices make listeners feel they are being told this adventure/quest/travelogue story by the very children who are in it. In the narrator role, McInerney brings urgency, fast pacing, and precise diction to bear as 11-year-old Samantha and her younger brother, Nipper, investigate the disappearance of their Uncle Paul. Who would have guessed that the lining of an umbrella would provide a map (of sorts) or that in following it, Samantha and Nipper travel to Paris, Florence, and Edfu via underground magnetic trains, pneumatic tubes, and white water rafts, all the while being pursued by ninjas? McInerney and Gardner spin an enthralling tale, for sure! The production concludes with the author sharing a pair of puzzles specially conceived for audio. A.R. Winner of AudioFile Earphones Award © AudioFile 2018, Portland, Maine [Published: MARCH 2018]