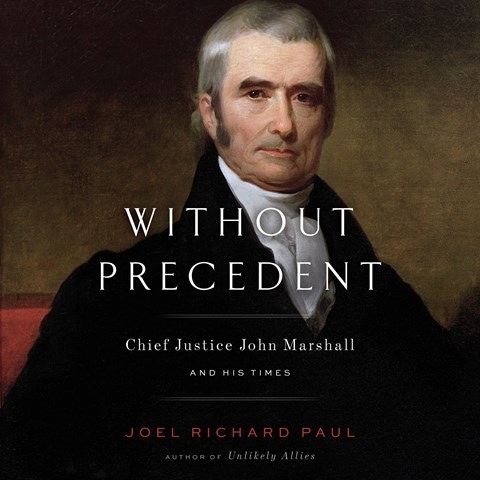 WITHOUT PRECEDENT Chief Justice John Marshall and His Times

Narrator Fred Sanders recounts the life of Chief Justice John Marshall from his humble origins to his service in the Revolutionary War. Over the years, he served as a legislator, a diplomat, and a true champion of the Supreme Court as an institution. Sanders's narration highlights the intelligence and charisma of the judge, a federalist stalwart who had the remarkable ability to inspire his philosophical opposites to overwhelmingly agree with his judicial rulings. Marshall is often contrasted with his political foe, Thomas Jefferson; here, author Joel Richard Paul eloquently gives the towering figure of American jurisprudence his due. As this audiobook documents his protean achievements as Chief Justice, it becomes clear that his length of service, history-making rulings, and influence on the court remain unparalleled. A.D.M. © AudioFile 2018, Portland, Maine [Published: APRIL 2018]