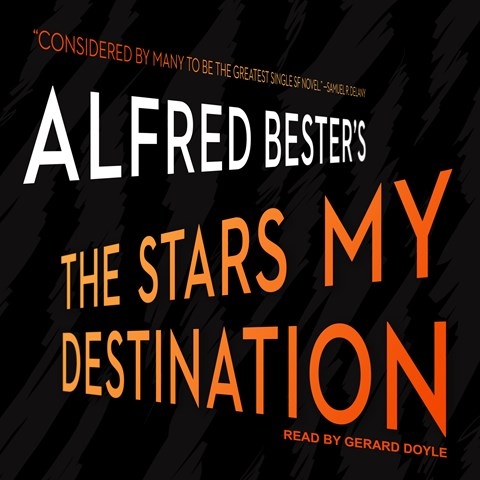 THE STARS MY DESTINATION

Marooned in outer space, Gulliver Foyle is a vengeful yet curiously sympathetic everyman in Alfred Bester's 1950s sci-fi classic. While he is badly flawed--he's a rapist, among other problems--as portrayed by Gerard Doyle, he's absolutely mesmerizing. Bester modeled the plot on another classic, Dumas's COUNT OF MONTE CRISTO. Instead of an island, Foyle is stuck on a dying spaceship that a passing ship decides not to assist. That could make anyone angry. Double it for Gulliver Foyle. Doyle's crisp and pleasant narrative voice darkens marvelously when channeling the implacable protagonist. And once Gulliver makes it back to Earth, Doyle believably colors the many other characters with telling vocal personalities. With its plot points about corporate greed, this is a timely classic. A.C.S. Winner of AudioFile Earphones Award © AudioFile 2018, Portland, Maine [Published: JULY 2018]