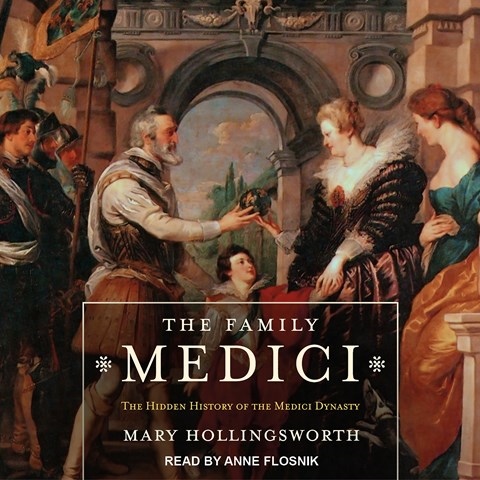 THE FAMILY MEDICI The Hidden History of the Medici Dynasty

Many worthwhile histories on audio, this one included, suffer from a profusion of names, dates, places, and events coming too quickly to be absorbed. Anne Flosnik's narration is well paced, but it's possible to miss details as the author takes the Florentine family from its moneylending beginnings in the twelfth century through its members becoming popes, queens, and dukes and to its eventual decline. Flosnik's voice is breathy and slightly strained, but she is articulate, clear, and, despite occasional singsong, expressive. Her Italian pronunciation is mostly literally correct, but, perhaps from an effort to be precise, she consistently accents vowels that should be unaccented, making the light language ponderous. Still, it's a competent reading, if not a greatly pleasurable one, and conveys the sense of the text well. W.M. © AudioFile 2018, Portland, Maine [Published: SEPTEMBER 2018]