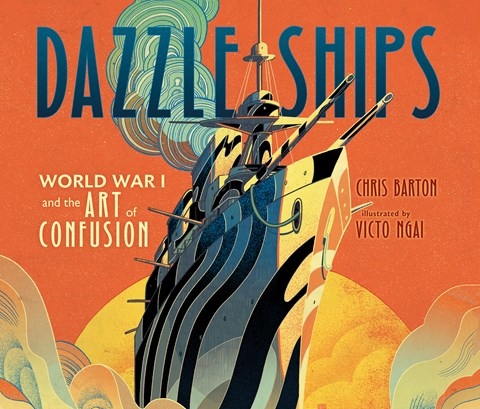 DAZZLE SHIPS World War I and the Art of Confusion

Ocean sounds, military marching music, and the booms of torpedoes place listeners right in the middle of WWI submarine warfare. Just in time for the 100th anniversary of the end of the war, this audiobook describes how Norman Wilkinson and a team of artists (including women) "dazzle-painted" British ships with brightly colored patterns to confuse the German U-boats. Narrator Johnny Heller narrates this fascinating, little-known story as if conversing with a friend. An author's note explains Barton's research process, and a timeline helps place dazzle ships in the context of the war. This audiobook stands alone without its illustrations, but listeners will definitely want to see a photo of the ships. S.C. © AudioFile 2018, Portland, Maine [Published: JULY 2018]