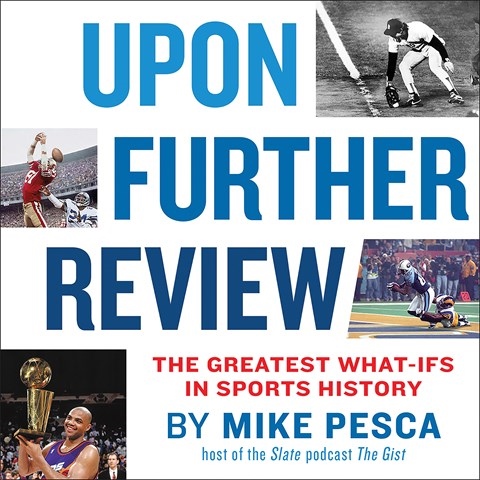 UPON FURTHER REVIEW The Greatest What-Ifs in Sports History

Author Mike Pesca assembles a cadre of "what-if?" questions from the sports world. Malcolm Gladwell starts things off with a cerebral foreword, which precedes more than 30 stories written in varying styles. Some are potentially history altering--such as Mary Pilon's "What If Title IX Never Was?"--some are thought provoking and creative--such as Jonathan Hock's "What If Jerry Tarkanian Had Beaten the NCAA and Liberated College Basketball?"--and some are laugh-out-loud funny--such as Jesse Eisenberg's "What If I Hadn't Written That Fan Letter to Dan Majerle in April 1993?" The stories, delivered by multiple narrators, are told with the right tonal inflections. All the narrators hit their marks, with Pesca being the most animated. Not one narrator misses a beat in this entertaining and educational compilation. M.B. © AudioFile 2018, Portland, Maine [Published: JULY 2018]