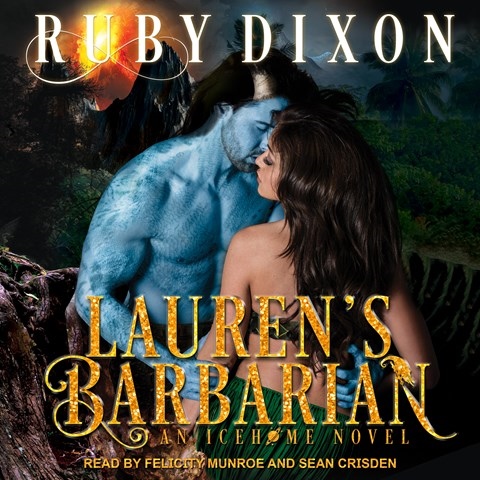 Narrator Felicity Munroe sells listeners on a planet where blue men mate with Earth women who have been rescued from alien abductions. Munroe portrays Lauren, a self-sufficient woman who makes the best of things, even being shipwrecked in a jungle below an active volcano. Munroe gives the prose an appealing smoothness. Lauren's thoughts about differences between Earth culture and her jungle survival adventure sound self-deprecating and amusing. As Lauren makes an emotional and sexual connection with K'Thar, her mate, Munroe's voice goes low and gentle. K'Thar's chapters are an equal treat as delivered by narrator Sean Crisden. He uses an accent to suggest K'Thar's language and mimics Lauren's pronunciations with proficiency. Background noises are noticeable and may not spoil this interplanetary frolic for some. C.A. © AudioFile 2018, Portland, Maine [Published: JUNE 2018]