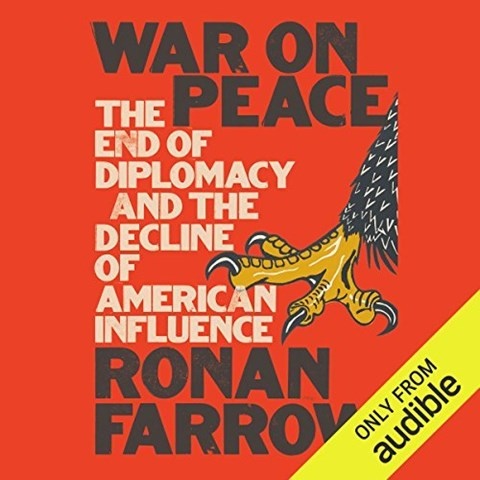 This timely audiobook is a warning: Because of deep cuts to the State Department and the change in the current administration's focus concerning diplomacy, the United States is facing a crisis regarding its global power. Written by the winner of the 2018 Nobel Prize in Public Service, the audiobook draws on interviews with diplomats to make its case. Ronan Farrow also narrates his audiobook, and his pleasant, deep, nasal-tinged voice lends some credibility to the work. He differentiates his tone to create some characters, and he clearly knows how to phrase his own words. But overall Farrow reads too quickly and doesn't pause enough to let his ideas sink in. The result is an important work--but one that may require listeners to hear some parts more than once. R.I.G. © AudioFile 2018, Portland, Maine [Published: JULY 2018]