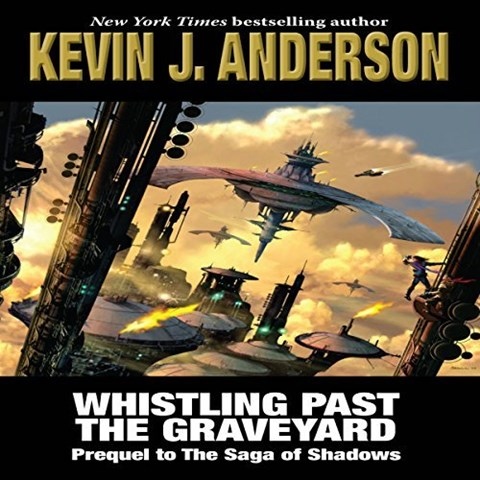 WHISTLING PAST THE GRAVEYARD Prequel to the Saga of Shadows

This fast-paced audiobook is set in the diverse Confederation, a decade after the Elemental Wars, with the human race still trying to get back on its collective feet. And right at the heart of this prequel to Anderson's Saga of Shadows is talented narrator Travis Baldree, bringing its diverse characters to life. Baldree's clever blend of dialects and accents helps the listener to separate the Roamers from the Neo-Amish. That's essential with dozens of characters living on a like number of worlds to keep straight. Baldree also keeps the action flowing, voicing a plague outbreak, the destruction of a space resort, and an uprising by an alien foe long thought defeated. Anderson's well-designed worlds and characters and Baldree's skilled narration make for a winning combination. Now it's time for another volume in this series. D.E.M. © AudioFile 2018, Portland, Maine [Published: AUGUST 2018]