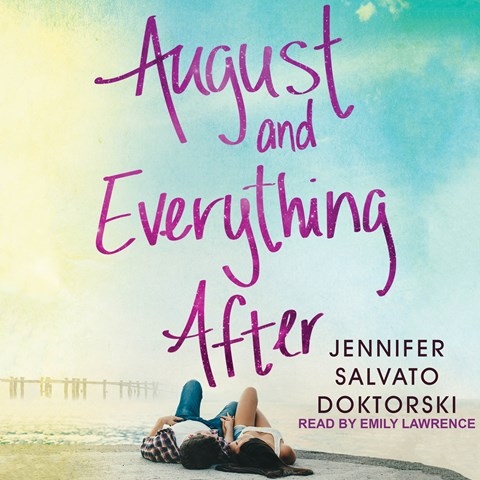 AUGUST AND EVERYTHING AFTER

Narrator Emily Lawrence delivers this slow burn teen romance in a cool tone. Quinn is hiding out for the summer on the Jersey Shore with her aunt following a senior-year relationship disaster. Working on her life plan hasn't progressed beyond turning her marching band skills into rock drummer dreams. She meets a troubled singer named Malcolm, and they bond over guilt and loss even as his recovery from opioid addiction throws up roadblocks. Lawrence fills the dialogue with personality and passion. The characters have a complexity that makes them satisfyingly realistic, owing equally to the writing and the narration. As the adrift Quinn looks to her future, Lawrence's narration is kindled with possibility and longing. S.T.C. © AudioFile 2018, Portland, Maine [Published: AUGUST 2018]