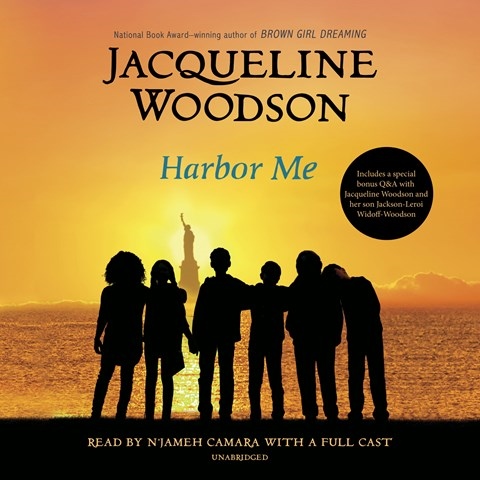 N’Jameh Camara narrates the emotive narrative of biracial Haley, who describes increasingly honest conversations among six classmates along with her own undisclosed truths. In this unique audio, six narrators represent characters in shared dialogues. Toshi Widoff-Woodson, portraying an African-American girl, is defensive and a bit spoiled. Dean Flanagan is reticent Ashton, a bullied white boy. Mikelle Wright-Matos affects a near swagger as Ashton’s confident African-American friend, Amari. Jose Carrera’s deeper, lightly accented Latinx voice chimes in as Tiago, and Angel Romero is the worried Esteban, whose father has been taken away by ICE. The least strong portrayal is by the author, a fitting representation of the teacher who remains in the background so her students can speak freely. An interview between Woodson and her son, Jackson Leroi, which serves as an afterword, is honest and powerful. S.W. Winner of AudioFile Earphones Award, 2018 Best Audiobook © AudioFile 2018, Portland, Maine [Published: AUGUST 2018]