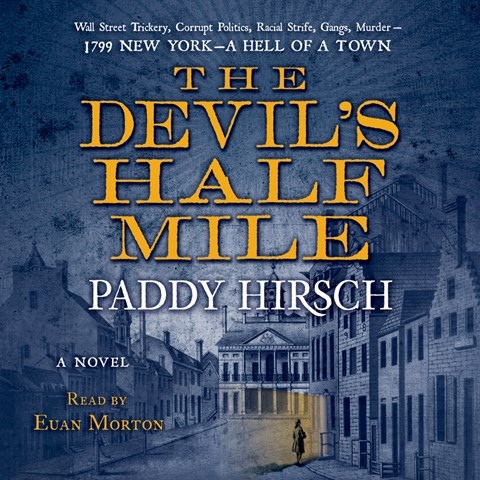 THE DEVIL'S HALF MILE

Narrator Euan Morton’s soft Irish brogue transports listeners to New York City in 1799. Justice Flanagan, newly returned from law training in Dublin and his part in the Irish Rebellion, investigates his father’s suicide and digs into an investment scandal. It doesn’t help that his uncle, Ignatius Flanagan, known as “The Bull,” is an enforcer and his father’s business partners are all crooked—up to their necks in a new investing swindle. Morton uses a variety of Irish, British, and Colonial accents to differentiate the characters and softens his voice for Carrie, the lone woman. Justice Flanagan is in everyone’s crosshairs—from constables to investors—as he searches for the truth. There’s a good deal of graphic violence and murder, which Morton reads with nary a hitch in his hypnotic Irish lilt. M.B.K. © AudioFile 2018, Portland, Maine [Published: JULY 2018]