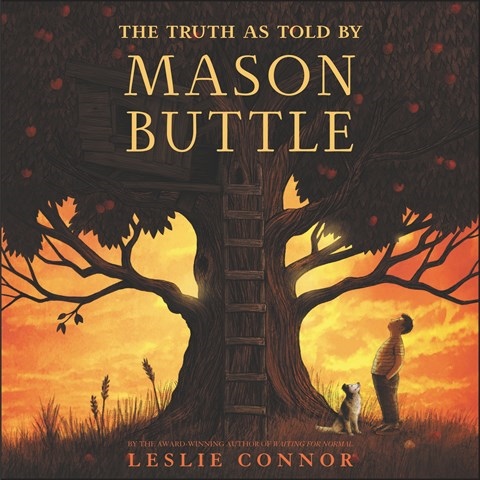 THE TRUTH AS TOLD BY MASON BUTTLE

Narrator Andrew Eiden's slow pace and soft tone perfectly depict the character of 12-year-old Mason Buttle. The rhythm in Eiden's narration captures Mason's storytelling voice, which is punctuated with the periodic refrain, "I'll tell you what." Listeners will be captivated by Mason's sincerity and gentleness. Eiden's low-key inflections suggest these shining qualities as Mason adopts an attitude that minimizes his learning disabilities, the death of his mother, his grandparents' unspoken grief, and the bullying of a neighbor. All these take a back seat to his frustration with his profuse sweating and his confusion about the police lieutenant who believes he's responsible for the death of his best friend. Eiden deftly portrays Mason's bewilderment and his gradual understanding of how he is perceived by the world, as well as the humanity of those who support his tender spirit. S.W. Winner of AudioFile Earphones Award © AudioFile 2018, Portland, Maine [Published: JUNE 2018]