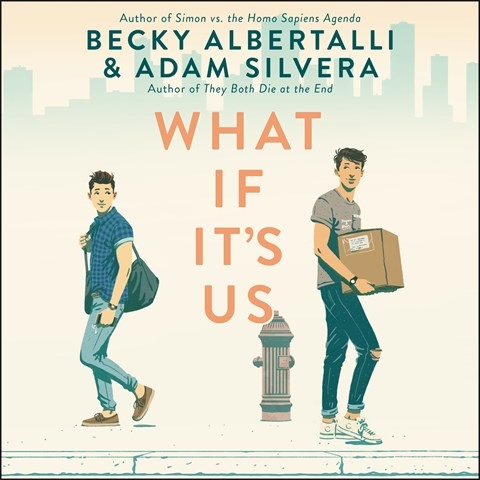 WHAT IF IT'S US

Collaboration works in the writing and narration of the alternating viewpoints of this story. Noah Galvin portrays Arthur, a bright Jewish teen who has recently come out but has never had a relationship. For him, a chance and momentary encounter with Ben at the post office seems fated--as if the universe has thrown them together--but neither of them knows the identity of the other. Galvin depicts Arthur's loneliness and desolation when he can't find the cute guy from the post office. Froy Gutierrez expresses the vulnerability of Ben, who has recently suffered a boyfriend breakup but also feels an instant attraction to Arthur. Ben and Arthur's friends support them in solving the identity mystery and in their burgeoning relationship. The narrators capture the heroes' accents and ethnicities as well as the story's drama, lively dialogue, pop-culture references, and distinctive secondary characters. S.W. © AudioFile 2018, Portland, Maine [Published: OCTOBER 2018]