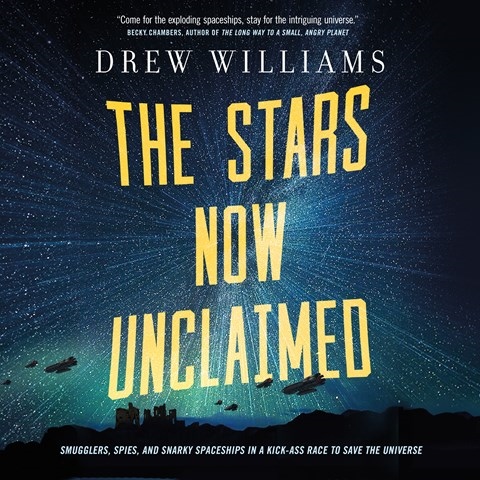 THE STARS NOW UNCLAIMED The Universe After, Book 1

In a thrilling nonstop adventure through the ruins of space, listeners accompany Jane, superbly portrayed as a hardened ex-soldier by Brittany Pressley. After Jane recruits a telekinetic teenager to her sect, the Justified, hoping to prevent the coming of a second disastrous space pulse, Jane's emotions slowly bleed through her tough exterior. Facing an invasion by another deadly sect, Jane teams up with her wise-cracking spaceship, whose upper-class British accent adds comedic relief between battles, an ex-boyfriend, and a lizard-like fellow soldier. Presley's narrative abilities bring each character to life, raising the emotional stakes as the gang faces horrific beasts and blazing guns in this pulse-pounding space opera. Science fiction fans will be riveted from the opening to the epic conclusion. J.M. Winner of AudioFile Earphones Award © AudioFile 2018, Portland, Maine [Published: OCTOBER 2018]