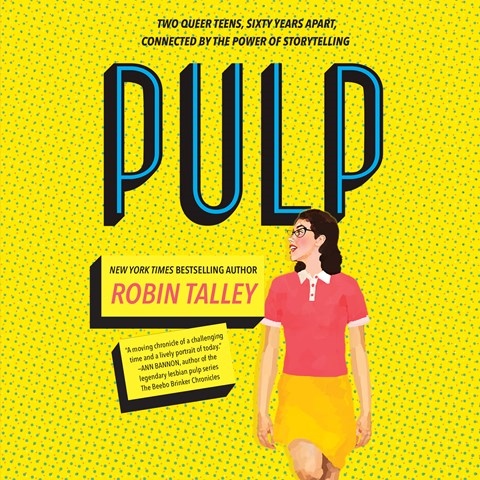 Stephanie Cannon narrates this audiobook, which moves between 1955 and 2017. Amid the 1950s Lavender Scare, when mass firings of gays from government jobs took place, Janet discovers a lesbian pulp fiction novel, and it opens up new worlds for her. Sixty-two years later, Abby is an out-and-proud lesbian coping with her parents' imploding marriage. The juxtaposition of these intertwining stories highlights the incredible changes lesbian communities have undergone in 60-plus years. Cannon gives both teens a subtle mid-Atlantic accent, reflecting their shared home of Washington, DC. Other characters have distinct voices, though, interestingly, Janet's and Abby's love interests are both given a similar high-pitched voice. Talley's storytelling elevates what could have felt like a history lesson. Cannon's engaging narration ensures that listeners will dive right into these teens' intertwining stories and not want them to end. S.P. © AudioFile 2019, Portland, Maine [Published: JANUARY 2019]