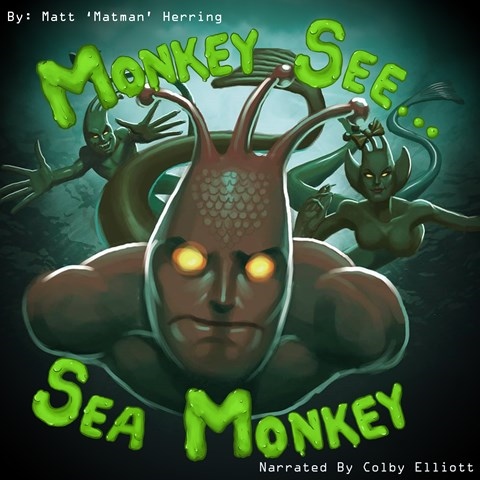 Colby Elliott's buoyant narration enhances an offbeat story that offers a little fantasy and a nostalgic look at kids' lives in the late 1970s. Ten-year-old Matt Herring is looking forward to the annual summer carnival in Broad Brook, Connecticut. Matt's youthful voice and logical reasoning are deftly depicted when he sees and smells something odd. Elliott's build-up of fear is palpable when pink creatures--which strongly resemble the sea monkeys that were advertised in Matt's comic books--invade the town, demanding revenge on the parents who mindlessly flushed them away. A realistic-sounding news report conveys the shocking news. Listeners will delight in hearing Matt feast on Swanson TV dinners, and Suzy Q snack cakes as he motivates his friends to battle the sea monkeys. The clever conclusion guarantees laughs. S.G.B. © AudioFile 2018, Portland, Maine [Published: OCTOBER 2018]