Home»Reviews»CAN YOU EVER FORGIVE ME? 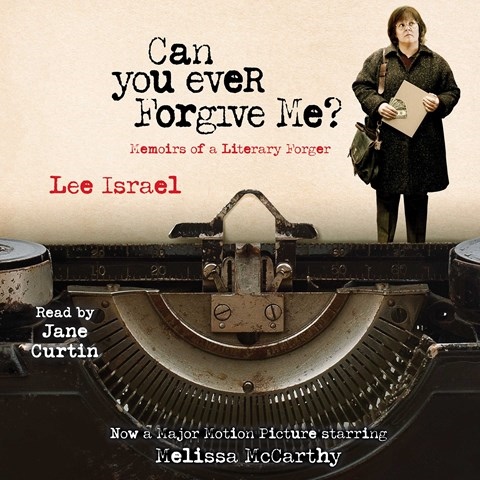 CAN YOU EVER FORGIVE ME? Memoirs of a Literary Forger

To start, listeners will hear some of the most interesting letters ever signed by Louise Brooks and Noel Coward. Neither of them wrote those letters, though. Lee Israel did. Jane Curtin narrates the literary forger's memoirs in a defiant, often acerbic tone. Israel shares memories such as her delight in finding a $30 typewriter and her horror at having a nightmare in which Noel Coward chided her from beyond the grave with shameless humor. She also breaks down the steps of forgery, making listeners insiders in her criminal capers. Listeners will find themselves chuckling and smiling through Israel's career decline and rebirth as a forger and thief. Israel's memoir does have serious moments, though. Most notably, she remembers her partner in crime in his final years as he died from AIDS. J.A.S. Winner of AudioFile Earphones Award © AudioFile 2019, Portland, Maine [Published: JANUARY 2019]