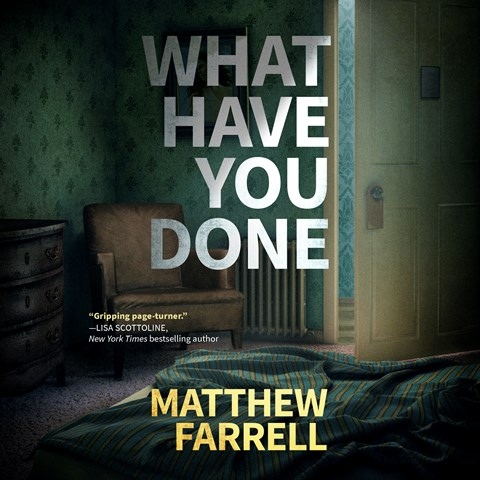 WHAT HAVE YOU DONE

Chris Andrew Ciulla is the perfect narrator for this twisted family drama. Forensic specialist Liam Dwyer and his older brother, Sean, a detective, are bound by a childhood tragedy and the resulting fallout. When Liam is called to a brutal murder, he discovers the victim is the woman he was having an affair with, and he can't remember the night before. Things spiral out of control as he becomes the prime suspect. Sean, always the hero, tries to save Liam as the investigation intensifies. However, as secrets are exposed, the truth about the brothers and their actions turns out to be more complicated than it at first seems. Speaking from the perspective of each brother--and numerous supporting characters--Ciulla deftly portrays frustration, heartbreak, betrayal, and rage as the story reaches an ending listeners won't see coming. K.S.M. © AudioFile 2019, Portland, Maine [Published: JANUARY 2019]