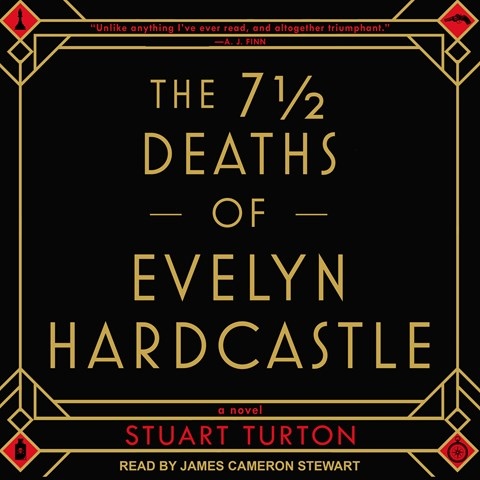 THE 7 1/2 DEATHS OF EVELYN HARDCASTLE

Narrator James Cameron Stewart portrays a large cast of characters in this elaborately plotted mystery set at a crumbling British manor. Each day, the protagonist wakes up in a new body, doomed to repeat the day until he identifies the murderer of Evelyn Hardcastle, a young heiress who dies during a ball at the end of the day. Stewart's task is not easy: He must create eight memorable characters, all men, while maintaining some consistency for the protagonist's interior voice. His female voices lack the ease and fluidity of the male ones and veer into a distracting falsetto. But, overall, he excels, using accents, intonation, and more to differentiate the hosts and guide the listener through the complicated plot. E.C. © AudioFile 2018, Portland, Maine [Published: OCTOBER 2018]