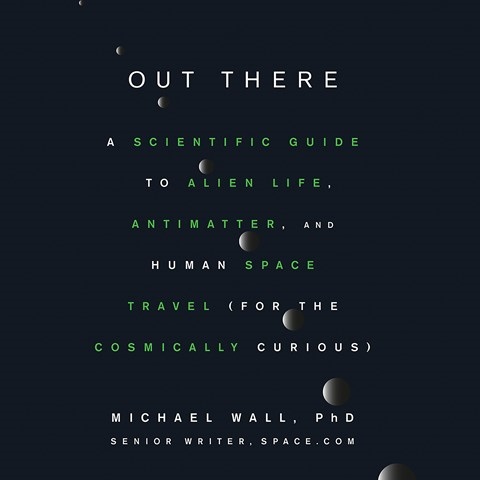 OUT THERE A Scientific Guide to Alien Life, Antimatter, and Human Space Travel (For the Cosmically Curious)

by Michael Wall | Read by Will Collyer

"Wow!" It's the introduction's first word, and Will Collyer tries to keep the wow factor in his narration. He sounds flip and funny, keeping a sense of wonder in his voice as author Michael Wall considers the future of space flight and the possibility of finding alien life. Wall's first stop on his survey of space is 1977, when a radio telescope received "The Wow Signal," which could have been an alien transmission. He weighs the odds of finding life in our solar system and beyond, and humanity's chances in space. He also reviews current efforts to explore and settle the moon and Mars. Collyer makes sure the basics of the various theories and developments come across along with the humor and enthusiasm. J.A.S. © AudioFile 2018, Portland, Maine [Published: NOVEMBER 2018]