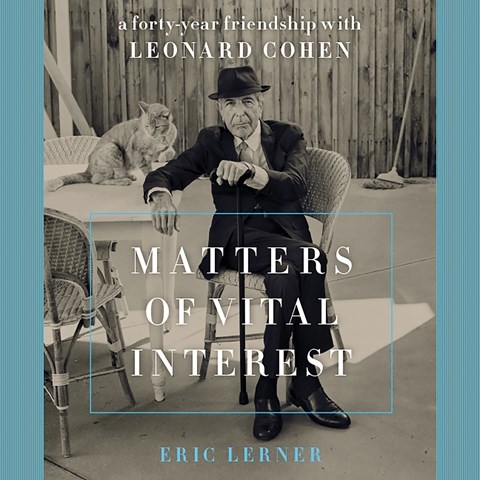 MATTERS OF VITAL INTEREST A Forty-Year Friendship with Leonard Cohen

Novelist, screenwriter, and producer Eric Lerner offers this deeply personal remembrance of his forty-year friendship with Leonard Cohen. William Dufris's narration is affectionate, understanding, intelligent, and, above all, completely believable. Lerner and Cohen met at a Buddhist retreat, where the two began a friendship that lasted until Cohen's death in 2016. Speaking with honesty and sensitivity, Dufris illuminates Lerner's portrait of the singer-songwriter-poet, allowing listeners to see this music icon as a loving family man who would rather be remembered as a good father, a man on a spiritual quest, and a loyal friend than as a public figure. Dufris does wonderful work, particularly when delivering the two men's conversations, which are faithfully reproduced by Lerner in this clear-eyed look at friendship and life's complexities. S.J.H. © AudioFile 2018, Portland, Maine [Published: DECEMBER 2018]