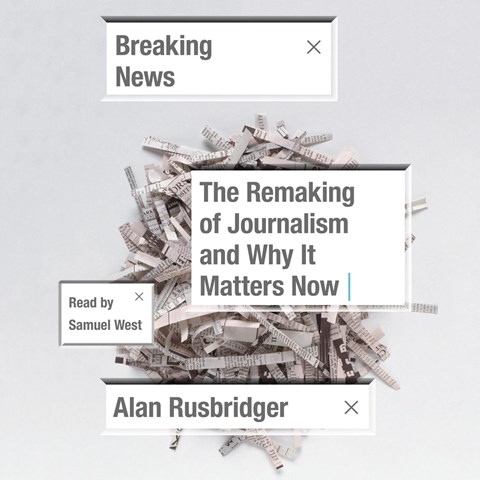 BREAKING NEWS The Remaking of Journalism and Why It Matters Now

With his plummy English accent, narrator Samuel West imbues this insider account of the newspaper business with a gravitas that reflects the author's unwavering belief in journalism's role in democracy. As editor in chief of THE GUARDIAN during the 20 years when newspapers were struggling to figure out a business model for the digital age, Rusbridger played a major role in the WikiLeaks and Edward Snowden stories as well as the NEWS OF THE WORLD phone-hacking scandal. West's pace has the listener feeling the adrenaline pumping as the reporters begin breaking important stories, but his measured tone aptly conveys the author's concerns about trying to balance deep research and a 24/7 news cycle. This is required listening for anyone who cares about the future of journalism. L.W.S. © AudioFile 2018, Portland, Maine [Published: DECEMBER 2018]