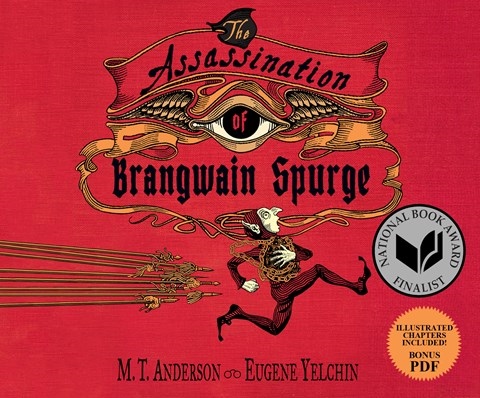 THE ASSASSINATION OF BRANGWAIN SPURGE

Narrator Gildart Jackson brings M.T. Anderson's world of elves and goblins to life from the perspective of one character, an elf. Through his illustrations, artist and coauthor Eugene Yelchin tells a totally different story from the perspective of a different character, a goblin. In order to fully grasp what is going on, listeners must have access to the bonus PDF. Jackson's voice for the titular elf, a scholar, sounds like he is reading a BBC newscast. In contrast, his goblin counterpart, the archivist Werfel, growls and slobbers as if he has too many teeth in his mouth. As the two academics debate each culture's version of history, they hurl insults that might start a new war between the elves and the goblins. There are laughs for listeners of all ages in this middle reader political satire. A.R.F. © AudioFile 2021, Portland, Maine [Published: MARCH 2021]