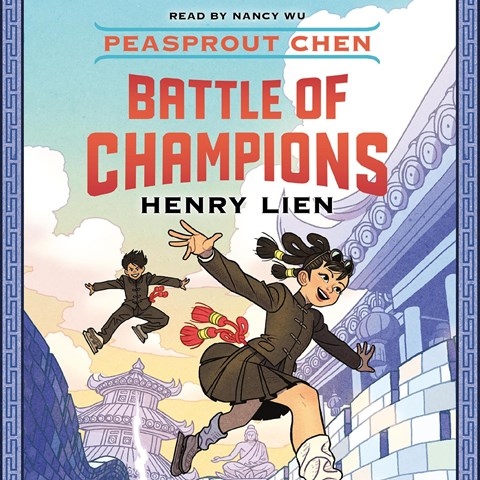 Narrator Nancy Wu expertly conveys Peasprout's hilarious snarkiness and spunk in the sequel to PEASPROUT CHEN: FUTURE LEGEND OF SKATE AND SWORD Traditional Asian music introduces the audiobook before giving way to an original pop song, presaging the blending of worlds in this Asian-inspired fantasy. Entering her second year at Pearl Famous Academy of Skate and Sword, Peasprout joins a "battleband," a skating team with elaborate moves that are part musical spectacle, part defensive attack. Wu's varied voices and accents help distinguish the characters, reflecting the friendships, sibling relationships, and rivalries, but it's Wu's eager and vulnerably sincere Peasprout who gives the story its heart. While listeners new to the series should start with Book 1, Peasprout fans will definitely be satisfied with this sequel. S.C. © AudioFile 2019, Portland, Maine [Published: FEBRUARY 2019]