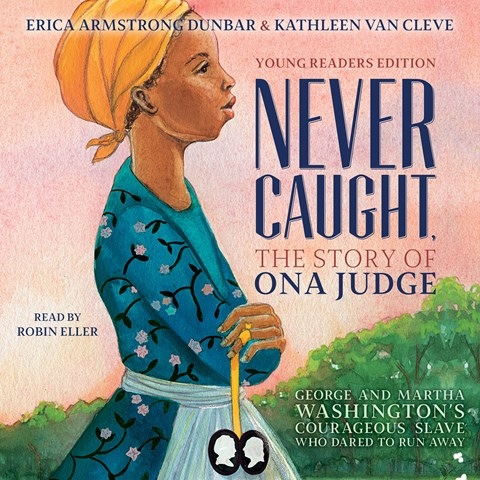 NEVER CAUGHT, THE STORY OF ONA JUDGE George and Martha Washington's Courageous Slave Who Dared to Run Away

Narrator Robin Eller brings a straightforward tone to this Young Reader's biography of Ona Judge; the adult version was a finalist for the National Book Award. Ona is Martha Washington's enslaved maid. In that role she travels with the Washingtons to Philadelphia, the seat of the U.S. government, prior to her escape to New Hampshire and subsequent life as a free woman. Eller tells the story (and what a story it is) with steady pacing and clarity to which she adds a modicum of emphasis when the author is underscoring the significance of various passages--for example, the observations that Ona always walks behind Martha Washington, is a person who is present but absent, and tends to Martha's needs rather than her own. Another part that Eller ensures is noted is George Washington's plan to keep the couple's slaves from gaining freedom during the Philadelphia years. Listeners have much to consider. A.R. © AudioFile 2019, Portland, Maine [Published: APRIL 2019]